The Bell-Wallace family from Ohio recently traveled to Walt Disney World Resort as special VIP guests of honor for Family Volunteer Day, but there was one special person they were most excited to meet — Disney chef, Bea Canderlario. 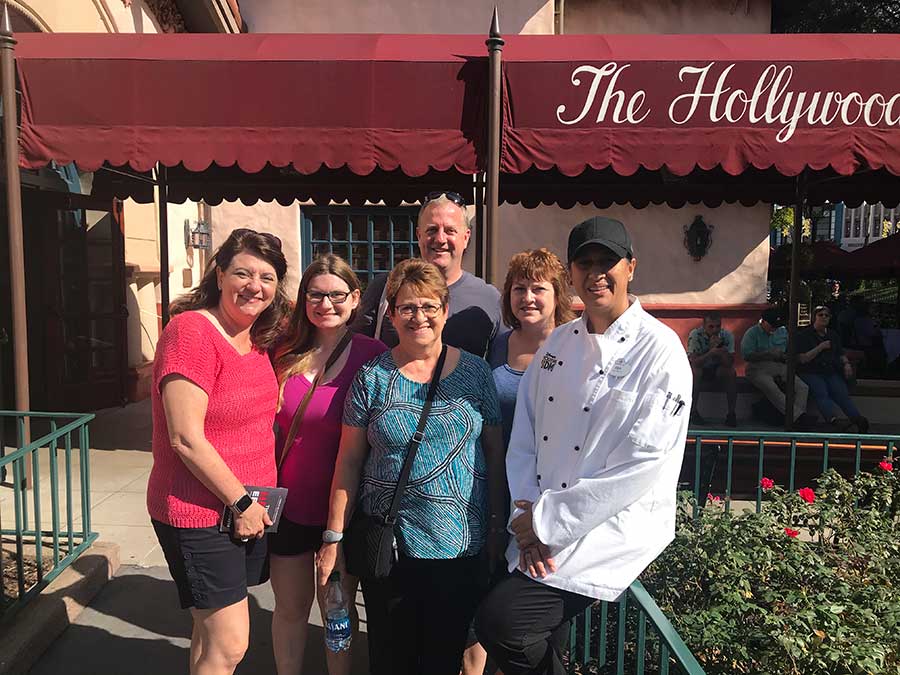 Carey Wallace and her family first heard about Chef Bea in Kevin Brown’s book “The Hero Effect,” which tells the story of everyday heroes making a difference in people’s lives. The Brown family met Bea in 2007 during a vacation to Walt Disney World Resort with their then nine-year-old son, Josh, who is on the autism spectrum. On the family’s first morning, they visited the restaurant Bea worked at and Josh ordered his favorite breakfast, Apple Pancakes. Josh is gluten intolerant, and at the time, the restaurant didn’t have gluten-free flour to make Josh his ‘special pancakes.’ The next day, the family returned and Josh again wanted his favorite pancakes. This time however, Bea was able to make the pancakes, as she had stopped at the store on her way home from work and bought gluten-free flour, just in case Josh, or another child like him, returned.

That touching moment was the beginning of long friendship between the Browns and Chef Bea, who calls Josh her “little sunshine.” The family was so touched by her thoughtfulness that they ate at Bea’s restaurant every day for the rest of their vacation and have visited with her many more times since.

For the Bell-Wallace family, Chef Bea’s inspiring story really struck a chord. Their own daughter Morgan is also living with autism, so they know first-hand how important these small acts of kindness can be for families like theirs.

“It is unusual to find people who go so far out of their way for kids who have special needs, and I know what it means when someone goes the extra mile to understand our daughter, so it was amazing to hear Bea’s story and to know that she makes such a difference,” Carey said. “I think Bea truly is a hero for families like ours and I wanted to meet her to say thank you for being that kind of person in the world.”

For Bea, it was all in a day’s work, as going the extra mile is what Disney Cast Members do best, but she was touched that the Bell-Wallaces had heard her story and wanted to meet with her during their own vacation.

“To me, it’s families like theirs that are the real heroes,” Bea said. “Getting to meet them has really made my day. It’s incredible to think that something I did more than ten years ago is impacting people today.”

The Bell-Wallaces were recognized as Disney Points of Light Volunteer Family of the Year finalists for their own acts of kindness, volunteering together for many years at Dreams on Horseback’s equine therapy program for veterans and children with special needs.